A woman whose joy and generosity continue to inspire us. 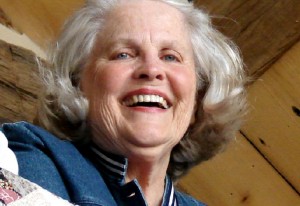 Sue Hodder led a life inspired by her family and her community. During her time with the Junior League of Minneapolis, Sue helped start the Greater Minneapolis Crisis Nursery, Teen Pregnancy & Prevention Counseling, and the 3 R’s Child Development Center, among many others. Sue was a dynamic force in the Junior League of Minneapolis and was awarded the Katharine Phelps Lifetime Achievement Award in 2007 for her exceptional contributions to the organization. 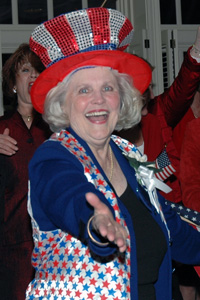 Sue was an active member of LeagueAires from 1984 to 2011. She especially loved singing for our veterans. Sue was a true patriot, sharing her love of country with everyone. Her favorite day was the 4th of July, and one of her favorite quotes was “You aren’t fully dressed without a smile.” All the women of LeagueAires dearly miss Sue’s smiling face and presence.

In loving memory of Sue Hodder, the Hodder family generously established The Suzanne Holmes Hodder Legacy Fund to support and expand the mission of LeagueAires. A major component of the gift enables LeagueAires to produce community educational events exploring the transformative power of music. As a result, the LeagueAires Lecture Series premiered in 2012-2013.

Beginning in 2013, each April the LeagueAires Sue Hodder Award is presented to a member of the community who has helped advance the joy of music through community service, performance, or music therapy initiatives.

2019 Award: Laurie Busyn
Laurie joined LeagueAires in 1979 and sang with us for 38 years, until 2017. During her tenure, she served continually in numerous roles, too many to capture in the entirety. She chaired Leagueaires in her 11th year of membership and followed that up with continuous services on committees such as New Member, Sunshine, Governance, and Development Fund. For decades, she was a polished announcer for our trouping performances. She took attendance; she also served as Leagueaires Librarian and Scheduler… twice in each role! She chaired our Spirit Fund Development Committee, and was Secretary to the Board. Always giving of herself over and above her choral commitment, Laurie even continued to write hundreds of thank you notes to donors after her vocal cords failed her and she could no longer sing. Laurie was the quintessential LeagueAire. Besides always being organized and prepared, she personified empathy and caring, both for her sisters in song and for the people we entertain. Laurie was a good friend of Sue Hodder, in whose name this award is given; she and Sue often spent time together at their cabins up north. They shared a deep bond and a common understanding of and dedication to leagueAires’ mission. LeaugueAires is proud to honor Laurie Busyn as its 2019 recipient of the Suzanne Holmes Hodder Legacy Fund.

2018 Award: Barbie Schulz
Barbie was a loyal, active member for 35 years, from 1981-2016 holding many leadership positions including Chair in 1984 when LeagueAires performed at Orchestra Hall and Assistant Chair in 1991. She played banjo and ukulele and tap danced. Her family business, Cimarron Printing has been a wonderful resource for LeagueAires print materials for many years.

2017 Award: Laura Ricker
Laura was a member of LeagueAires for 25 years, from 1981-2006. She was our choreographer for 24 of these years. She enjoyed singing and performing with her Mom, Peggy McLellan, for approximately 15 years.

2015 Award: Pam Bacon
Pam was a member of LeagueAires for 44 years! As a charter member, she began singing with the group during their first trooping season in 1966. Pam was very active as a singer, dancer, soloist, and member of numerous committees, and she loved dressing up and playing characters (especially Miss Piggy). Pam is currently an Emeritus Sustainer with the JLM.